Fungi of the genus Phytophthora are soil fungi which after infection develop in the plant’s tissue.

As with Pythium, this is a fungus which causes seedlings to deliquesce (damping off disease) and roots to rot. On occasion, Phytophthora works alongside other agents of disease.

Chemical controls are applied as a preventive.

> Phytophthora : cause of soft rot and damping off of seedlings

Fungi of the genus Phytophthora are Phycomycetes, characterised by a hyphal thallus without transverse septa.

There are two stages to the life cycle of this fungus, and it is environmental conditions that determine the emergence of each. In unfavourable conditions, or at the end of the cycle, sexual reproduction takes place and produces the survival form of the disease organism (a coated oospore): the other stage is one of spreading and growth with asexual reproduction (conidia spores) and growth of mycelium. When humidity is low, these conidia produce hyphae straight away; when it is high they develop into sporangia and form zoospores, a primitive kind of spore which can only move around in water (as in the case of Pythium).

Since its life cycle involves a stage of sexual reproduction, the fungus belongs to the class of Oomycetes. It is in the Pythiaceae family, of the order Perenosporales.

It is a soil fungus which after infection develops in the plant’s tissues. The mycelium grows between cells and puts out suckers to fed from them.

There are a great many species, many of which are polyphagous and capable of infesting a number of plant species. Along with Pythium, Fusarium and Rhizoctonia solani it is one of the main causes of damping-off disease in seedlings and root rot.

Infection starts with the roots (rootlets).

The plants affected start to rot, or show necrotic lesions, in the root system, in the section (hypocotyl) between shoot and radicle (in seedlings and young plants), or at the collar and the base of the stalks. The attacks occur most often after the seedlings have shown above ground, and they kill the plant.

When the seeds themselves are attacked this results in a failure to show; the impression is that the seeds have rotted.

In adult plants, the roots are blackened. The plant above ground turns yellow and then withers, but this is of course not a distinguishing sign of this disease. Phytophthora spp. are vascular fungi, which block the sap-transporting vessels and the plant dies of ‘apoplexy’. Dry soil makes these symptoms more likely, since the dead roots can no longer assimilate free water from the soil, and the plant suffers from drought.

Phytophthora spp. may produce these symptoms on its own or in concert with other fungi: the specific cause(s) can only be determined by exact analysis. 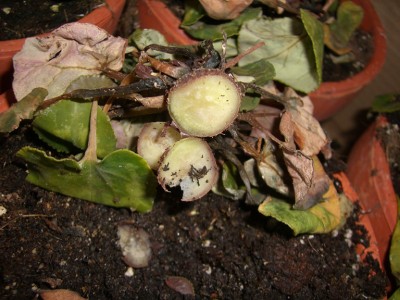 Glazed tuber of a plant contaminated by Phytophthora capsici 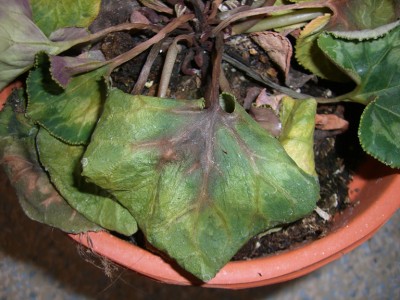 Foliage and stems of a plant contaminated by Phytophthora capsici 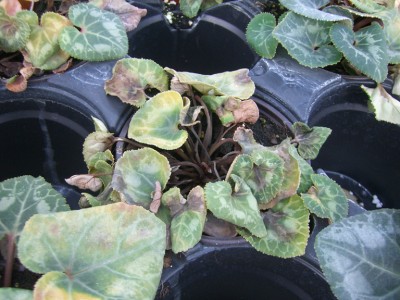 Half mature plant affected by Phytophthora during the summer 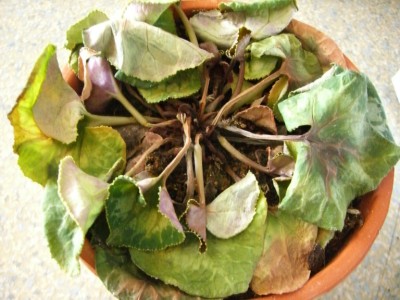 > How the fungus spreads and survives

Phytophthora spp. is capable of living as a saprophyte in the soil, making use of decomposing organic matter. Even without plants or plant debris, it can survive: to do so under hostile conditions it forms resistant organs known as chlamydospores.

The zoospores can move around in water and infect new host plants. They are chemotropic, moving towards the roots by smell. Water that splashes or drips is an important vehicle of spreading this fungus.

It is possible to treat the growing medium, by mixing the chemical in, to sprinkle the ground, or to spray the above-ground parts of the plants.