Bradysia is the main genus encountered in the glasshouse.

Fungus gnats of the genus Bradysia differ from the Scatella fly in having a slender body, long legs, a sloping stance and shiny triangular wings. The larvae attack young or weakened plants.

They devour the rootlets and if the population grows very large may feed on the corm.

Biological control of the larvae by means of nematodes gives very good results.

In moist, heated glasshouses seeds, seedlings and young cyclamen plants are often subject to attack from various species of gnat. Healthy adult plants, on the other hand, are seldom affected by this pest.

This glasshouse pest is a small member of the order Diptera. Insects of this order are easy to recognise by their single pair of wings. Their eyes are large compound ones. Fungus gnats belong to various genera in the Sciaridae family: Bradysia, Sciaria, and Lycoriella. The particular species at work may be relatively hard to tell apart exactly.

Bradysiapaupera is the species most often found under glass.

Gnats enjoy the damp places in the glasshouse. The adults themselves generally do little harm; it is the larvae that do the damage.

The Diptera are insects that metamorphose, or alter shape, completely. The larva is usually called a ‘maggot’; it has a typical cylindrical-conical shape, no legs, and mandibles reduced to two mandibular hooks. At the end of its development the maggot becomes immobile and takes on a barrel shape. This is the pupa, which gives rise to the adult after metamorphosis.

The adult is a little gnat, dark to black in colour, from 2 to 5 mm long. It has long antennae and long legs. In shape it rather resembles a mosquito, with a prominent thorax. It prefers dark places, flies near ground level, and may appear at any time of year. These adults feed very little during their lives, which may last a few days. They have large veined wings which enable them to move fast, with a random, darting flight.

The legless larvae measure 5 to 8 mm, with a white translucent body and a black head. They take from 24 to 27 days to develop, over 4 larval stages. The pupa stage is in the soil or the growth medium: the pupae are 3 to 6 mm and are coloured between light chestnut-brown and grey. A week later, the adults emerge, to live for 4 to 10 days. 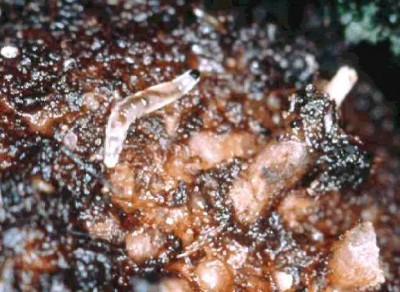 It is the larvae which cause the damage, during the 2 or 3 weeks that they feed. Their diet is mostly rotten and mouldy material: they enjoy rotting plant or animal tissue, fungi and soil algae. Though they do eat plants, the larvae go for perishing or weakened tissue by choice. Under certain conditions, though, which depend on the nature of the growth medium, the health of the plant and the population density of larvae, they may attack the living plant tissue. If the compost or soil is damp and temperatures are low, the plant is not at its strongest and can be susceptible to such attacks.

At such times the larvae damage the young and soft parts of the plant by gnawing them. In the case of cyclamen it is almost always the seedlings, just sprouted or just pricked out, that are attacked. The larvae gnaw mainly the earliest leaves and the young roots under the corm, and can make a hollow under the latter so that the plant becomes detached from its growing medium. This damage may cause a wilting of the whole plant, and in serious cases may kill it outright.

These larvae also provide effective means of transport and help for other disease-causing organisms and pests. They may bring nematodes, fungal spores (such as Fusarium oxysporum), mites and viruses. As well as the serious wounds to the root system that the larva itself causes, there are many diseases that make the most of this weak condition of the plant to get a foothold.

The adults feed mainly on fungi.

These gnats are able to fly for a long time and over long distances; they can found colonies in various parts of the glasshouse. Eggs and nymphs can also be transported and spread in soil.

Very good results have been obtained against Sciaria larvae with the insect parasite nematode Steinernema feltiae. This soil nematode belongs to the Steinernematidae family. It is also known as S.bibionis or Neoaplectana carpocapsae.

Its larvae and adults look similar. There are generally 4 larval stages, of which the first develops within the egg. The stage 3 larva is infectious and penetrates into the host by its natural orifices. It pierces the gut wall and reproduces there. The Sciaria larva is killed by bacteria resident in the nematode and loosed into the victim’s gut. The host maggots go yellow one week after introduction.

The commercial preparation contains infectious stage 3 larvae, and is sold under the name Entonem. There are other products: Nemasys and Nemasys-M, Exhibit SF-WDG.

The distribution company’s instructions should be observed (for prevention and cure). Take care not to introduce the nematodes in full sunlight.

The mite Hypoaspis miles is brown, about 1mm long. It is a predator of Sciaridae larvae which it eats by sucking. It enjoys damp compost and needs a temperature above 10º if it is to be very active. It can remain alive for seven weeks even in the absence of its prey. The pest population begins to go down 2 weeks after the start of treatment. Commercial preparations are sold as Hypoaspis-System and Hypo-line m. For the conditions of use, refer to the distributor’s instructions.

With a large broom as wide as the staging it is possible to combat this pest by hand. The broom has a sleeve with a sticky fly-screen, which has lengths of string dangling from it. As the screen is advanced these strings touch the plants and set the flies flying, to get stuck onto the screen.

Adults and larvae must be tackled together. There is no active ingredient at present specifically authorised in France for use against fungus gnats on ornamental plants. What is more, the plants treated will often have to be young and sensitive ones.

With Diptera, development of resistance is quite often a problem; so regular programmes of repeated treatment are not a good idea.