The Otiorrhynchi are a kind of weevil: The Black Vine Weevil O. sulcatus and the Cyclamen Weevil O. rugosostriatus are the worst pests on cyclamen.

The damage is done partly by the leaf-eating adult, brown to black in colour and some 6 mm long, and partly by the larvae which feed on the rootlets and main roots at the base of the cyclamen bulb.

The glasshouse climate enables this sort of beetle to develop at any time of year.

Chemical control is not easy, since adults and larvae require separate treatment, and resistance has already become apparent.

Preventive treatment, such as the use of bagged commercial compost, weed control in the surrounding areas and removal of rotting plant material, considerably reduces the risk of infestation.

Biological control is a useful alternative to chemicals.

Vine weevils belong to the family Curculionidae (weevils) in the superfamily Curculionoidea of the order Coleoptera (Beetles). They are round weevils.

O.sulcatus, the Black Vine Weevil, is the kind most often found under glass; it is a pest of many ornamental plants as well as cyclamen. Other species encountered are O. singularis, O. lugdunensis, O. ovatus and O. rugosostriatus.

Two forms of damage are done:

> Stages of development and body features

The Vine Weevil’s development has 4 stages:

The genus Otiorrhynchus includes a number of species characterised by a head with a beak and mouth parts at the end of this beak, and the antennae in the middle of it. It also has bent wings and a curved abdomen.

The first adults usually appear in April or May. They are brownish-black, shiny, dotted with yellow patches on the back, and around 1 cm long.

They have a stubby beak, with the typical bent antennae rising from its base.

The adults’ wing-cases are deeply channelled. They do not fly, as like all coleopterans they have no wings; they have 6 legs, and are hard to make out against the background of compost or soil.

Reproduction is asexual (parthenogenetic). In northern Europe there are only females. They lay eggs in the growing medium from July to late October, and one female can lay from 100 to 1000 eggs. The laying season lasts longer under glass.

The eggs are white, round and 0.7 mm in diameter.

The egg hatches into a larva after 10 to 25 days. These legless larvae are whitish pink with a chestnut coloured head and live in the ground for 2 to 12 months, reaching a full length of 1 cm. This is the form in which they over-winter. As soon as the temperature rises, the larva becomes active again and becomes a nymph or pupa in the spring, spending 20 days or so in this stage (still in the soil) before emerging as a new female adult, which lives for 5 to 12 months.

Outdoors there is one generation each year; but in the glasshouse each of the stages may be present at any time: there is no hibernation.

The adult is reddish- to blackish-brown and 6 mm long. It is oval in shape, and very similar to O. sulcatus, with the same life cycle. Eggs are laid in the ground from May to July, and the larvae go into the nymph stage in January. 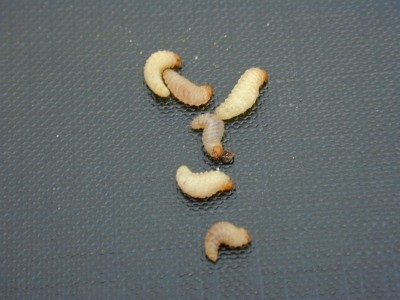 Both adults and larvae cause visible damage to cyclamen, but it is the larvae which do the most harm. They are active day and night, while the adults only feed by night, hiding during the day under plant litter, planks and pots, as well as in the heart of the plant.

The small larvae feed on rootlets, while the larger ones eat the main roots at the base of the bulb. Even the corms themselves may be gnawed. These attacks cause growth to stop and the leaves to go yellow, ending with wilt all over. Just one or two larvae in a pot can be fatal for the cyclamen.

From springtime on, the adults feed on the leaves starting at the edges. The bites show as characteristic nicks (which spoil the plant’s appearance considerably) and the leaf margin has a wavy look. This damage may be seen from August until the end of the growing season.

The adults may not fly, but they are great walkers. They can feed on many different kinds of plant, and so spread far and wide: the first thing to do therefore is to examine any imported plants, as well as those already in the glasshouse, and check they are free of infestation.

Larvae and adults require separate treatment if they are to be controlled effectively. The adults are hard to combat since they are active for such a long period, while chemical control of the larvae is made harder by their resistance to many insecticides. Nevertheless effective control is possible by using insecticides mixed in with the compost.

Biological methods are a useful alternative to chemical control.

They use a nematode (eelworms) parasite of the larva. The most active of these little round worms for this purpose are those of the order Rhabdita, in the Steinernematidae and Heterorhabditidae families.

A number of these families’ species attack vine weevil larvae, but the best results to date have been with Heterorhabditis sp. (such as H. megidis). Steinernema feltiae also gives good results against larvae.

These nematodes develop in 4 stages, two of which are directly involved in weevil eradication. The first larval stage develops without hatching, right in the egg; it plays no part in the infection process.

The second larval stage then leaves the egg, but is not infectious either: it is the larvae of stage 3 that are infectious and actively seek out their host, penetrating the larvae by means of their natural body orifices and through the epidermis. The nematode larvae contain bacteria (Xenorhabdus sp) in their gut, which then spread to the weevil larva and there multiply. The weevil larva goes brown and dies of septicaemia within 48 hours. The bacteria are symbiotic with the nematode larvae, breaking down the weevil larva’s tissues into a form that the nematode larvae can assimilate. These larvae then set off in search of a new host.

The final larval stage of the nematode infects the adult weevil, developing inside it into a hermaphrodite adult nematode, which lays an egg in its host. The surviving eggs produce male and female individuals which mate, and the eggs that the females then lay begin a new cycle of infection.

Heterorhabditis megidis nematodes are delivered in the third larval stage on an inert medium, under the name Larvanem. After about a week, weevil larvae will be parasitised. The procedure requires high humidity and a soil temperature of around 15ºC (59ºF) for success; above 27ºC (81ºF) the nematodes’ effect falls off.

The product Nemasys is applied as a spray. The nematodes are supplied at the adult or larval stage.

5000 nematodes are needed per litre of compost.

Steinernema feltiae, a nematode parasite of Leafminers, gives good results according to a report from Holland. The commercial preparations are Nemasys, Nemasys-M, Exhibit SF WDG, Entonem.

Steinernema carpocapsae is active against vine weevil, also; it is sold under the name Exhibit SC-WDG.

There is also an effective gut pathogen mould (Metarhizum anisopliae).

Good results have also been obtained with the combination of a mould, Beauveria brongnartii, and the nematodes Heterorhabditis sp.

Steam disinfecting of soil and compost destroys this pest at all stages.

Treat as soon as the adults appear (April, May) and continue fortnightly until September, using a wettable powder and large quantities of water, preferably at night.

The larvae are treated in watering the soil or mixing micro granules in with the growing medium.